Propane Education & Research Council: Seven Reasons to Get a Propane Generator Before the Next Big Storm For the first time in history, government employees at the National Mall and Memorial Parks (NAMA) have been cutting the lawn—and greenhouse gas emissions—with propane-powered lawnmowers. The six new lawnmowers were originally donated by the Propane Education & Research Council (PERC) to the National Parks Service in July of this year. The donation amounted to approximately $70,000 in equipment and was brought about through the collaborative efforts of the Greater Washington Region Clean Cities Coalition, the Propane Education & Research Council, and the U.S. Department of Energy (DOE). The new lawnmowers are part of the National Park Service’s Green Parks Plan, which helps the parks to reduce dependence on foreign oil, mitigate the effects of climate change, and conserve energy.

The National Mall and Memorial Parks (NAMA) began using propane-powered lawnmowers to cut their grass earlier this year. The project was brought about through the collaborative efforts of the Greater Washington Clean Cities Coalition, the Propane Education & Research Council, and the U.S. Department of Energy. Credit: Greater Washington Clean Cities Coalition. “We’re always looking for ways to integrate sustainable practices into every part of our operations, as well as looking for partnerships with other federal agencies, like DOE, and organizations like the Propane Education & Research Council and the Greater Washington Region Clean Cities Coalition,” said Bob Vogel, superintendent of the National Mall and Memorial Parks. Since PERC’s donation in July, the propane lawnmowers have made up one-third of the National Mall’s total fleet of mowers. The propane-powered lawnmowers have replaced several of the Mall’s diesel-powered mowers. Since the program’s inception, the switch to propane has helped NAMA to reduce fuel spills, save money on fuel and maintenance costs, and reduce greenhouse gas emissions by 50% per lawnmower. More specifically, the switch was forecasted to reduce carbon monoxide emissions by 80%1, and should also reduce carbon dioxide emissions by about 15%2 (when compared with diesel). And the longer the government utilizes propane-powered lawnmowers, the more carbon emissions will be displaced. “People are amazed at how much mowing and grooming the national monuments and national memorials need, and these new propane-powered mowers are fantastic, and clean, green machines to do that with,” commented Dennis Smith, national director of the U.S. DOE Clean Cities Program 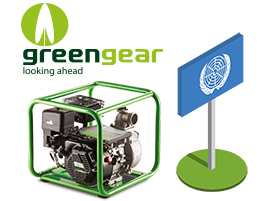